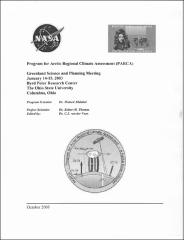 NASA's Program for Arctic Regional Climate Assessment (PARCA) was formally organized in 1995 (though it existed informally several years before that) to assess and interpret the mass balance of the Greenland ice sheet through a combination of in situ, airborne, and space-based measurements. On January 14 and 15, 2003, scientists at The Ohio State University hosted a meeting of PARCA investigators, the first such meeting in nearly two years, to discuss progress of current research and plans for the future. Brief reports summarize ongoing work and offer informed perspectives and recommendations on avenues of research for the near future. Current and future efforts will be focused on understanding the causes of changes observed in the 1990's and placing them in their appropriate climatological and glaciological context. All these efforts will be carried out with a view toward enhancing interpretation of data from ICESat and any follow-on missions.