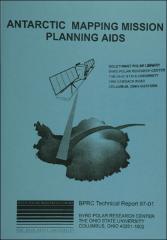 On November 4, 1995, the Canadian RADARSAT was carried aloft by a NASA rocket launched from Vandenburg Air Force Base. Radarsat is equipped with a C-band Synthetic Aperture Radar (SAR) capable of acquiring high resolution (25 m) images of Earth's surface day or night and under all weather conditions. Along with the attributes familiar to researchers working with SAR data from the European Space Agency's Earth Remote Sensing Satellite and the Japanese Earth Resources Satellite, RADARSAT will have enhanced flexibility to collect data using a variety of swath widths, incidence angles and resolutions. Most importantly, for scientists interested in Antarctica, the agreement for a U.S. launch of RADARSAT includes a provision for rotating in orbit the normally right-looking SAR to a left-looking mode. This 'Antarctic Mode' will provide for the first time a nearly instantaneous, high resolution view of the entirety of Antarctica on each of two proposed mappings separated by 2 years. This is an unprecedented opportunity to finish mapping one of the few remaining uncharted regions of the Earth. The completed maps will also provide two important benchmarks for gauging changes of Antarctica's ice cover. The preparation of a digital mosaic of Antarctica is being conducted under a NASA Pathfinder Project awarded to the Byrd Polar Research Center of The Ohio State University. The primary goal of this proposal is to compile digital SAR mosaics of the entire Antarctic continent using a combination of standard and extended beams during the "Antarctic Mode" of the Radarsat Mission. Agreements with the Canadian Space Agency call for the first Antarctic Mapping Manuever to occur in September, 1997. A mission plan to coordinate that complex acquisition and downlinking of Antarctic data has been developed by NASA's Jet Propulsion Laboratory. The Alaska SAR Facility (ASF) will be used as the primary data collection site supported by collections at the Canadian Gatineau and Prince Albert Ground Stations. ASF will process data into images which will be sent to OSU for compositing into map products using state-of-the-art equipment to be designed by Vexcel Corporation of Boulder Colorado. Imaging geometry will be constrained over the Antarctic using active radar transponders constructed by the Environmental Research Institute of Michigan and by corner reflectors deployed by the British Antarctic Survey. Additional ground control is being supplied by the National Imagery and Mapping Agency. Final products will be distributed through the ASF and the National Snow and Ice Data Center which are both NASA Data Archive Centers. The mosaics and ancillary information will be prepared on CDROM and will be made available to the science community through NASA DAACs. Science opportunities envisioned for the program are summarized on the accompanying table. These include studying the dynamics and variability of the Antarctic Ice Sheet including studies of regions like the Wordie Ice Shelf and the Larsen Ice Shelf which have recently experienced unexplained and nearly catastropic retreat. Geologic applications include large scale mapping of faults, volcanic features, and mountain building processes (particularly the Transantarctic Mountains). Finally, there is simply the unprecedented opportunity to use these digital maps in studies of many previously unexplored areas of the Southern Continent.