Glacier Dynamics into the Next Century 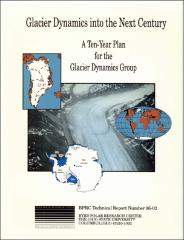 This document presents a ten-year plan for the Glacier Dynamics Group at the Byrd Polar Research Center of The Ohio State University. One of the strengths of the existing group is the quantitative interpretation of data collected on the ice sheets of Greenland and Antarctica as well as on smaller mountain glaciers. The development of theoretical and numerical models is strongly observation-based while at the same time, new interpretations have often guided additional measurement programs. This interaction between theory and observation is the main reason that the GDG has become successful and should be continued in the future. The primary objective of the work conducted by the GDG is to predict future contribution of the cryosphere to sea level, both on the short term and on a longer time scale. To achieve this goal, the GDG should expand its scope of research, in terms of geographical areas studied as well as in terms of the type of problems investigated. Until recently, the geographical areas being studied by the GDG were restricted mainly to Central Greenland and West Antarctica, in particular Ice Stream B. With the wider availablity of satellite imagery, the GDG has started to venture into other areas and this geographical expansion should be continued. Similarly, the topics of studies conducted by the GDG should be more diversified. Much of the work in the past has focused on ice-stream dynamics. This work is important in understanding the flow of ice in the West Antarctic Ice Sheet, but there are other problems that warrant investigation. Furthermore, the group should become more involved in forecasting future behavior, an area virtually neglected by the GDG until now. To adequately address the research priorities outlined in this document and to maintain its leadership in the glaciological community, the GDG will have to expand and broaden its base of expertise, New members with background in altimetry, airborne ice-penetrating radar, image analysis, numerical ice-sheet modelling and ice and climate interactions, are needed. Achieving this growth will require research staff residing at Scott Hall to become more aggressive in securing funds and attracting additional researchers. Over the next decade, the number of research positions should double, from the current five to ten (not including faculty appointments in affiliated departments). Such growth cannot be achieved by the GDG alone, and will require active support from the University.