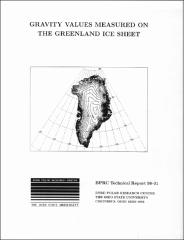 During recent years, NASA has funded several research expeditions to Greenland. For four of those years (1992, 1993, 1995, and 1996), a LaCoste-Romberg gravimeter was taken into several areas throughout Greenland. The first expedition gathered data only in a very small area in West-Central Greenland. The second expedition gathered data along a traverse that started from the previous area and progressed about 500 miles to the South. The third expedition collected data from along the entire West coast. The final expedition gathered data from all around Greenland following the 2000 meter contour. Data were gathered on the ground by use of skidoos for the first two expeditions, while air transportation was used to get from site to site for the last two expeditions. The first two expeditions had a higher sample frequency but also suffered from larger observation errors in the form of instrument tares. The purpose of this report is to document the analysis and tabulation of that data. Each year will be presented separately, and the analysis of the data for each year will be provided to explain the derivation of the final results presented at the end of each section. In general, each year's section will show how those data were collected, converted to relative gravity, analyzed and processed to remove observation errors as needed, and then converted to absolute gravity based on measurements made at IGSN sites. A conversion table specific to the LaCoste-Romberg gravimeter used for the measurements is included in Appendix A. GPS measurements were made simultaneous to the gravity observations, and ellipsoidal coordinates are provided for the respective gravity values.