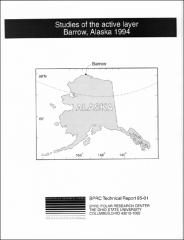 In connection with the field work concerning the establishment and monitoring of an ITEX site (International Tundra Experiment) at Barrow during the growing season 1994 soil investigations of the active layer were carried out from mid June to the end of August. The two major objectives were to monitor the thickness of the active layer and the soil moisture in the ARCSS (Arctic System Science) grid, and to continue the long-term monitoring of the active layer of selected CRREL plots within and outside the ARCSS grid. The grid is located within Barrow Environmental Observatory just south of the NOAA observatory northeast of Barrow, Alaska. The measurements of the depth of the active layer took place on a regular basis in the whole grid and in some of the CRREL plots, which were established more than thirty years ago and have been monitored throughout the 1960s and since 1991. The measuring of the soil moisture took place within the ARCSS grid. Soil moisture samples were taken from the whole grid and a specific investigation focused on soil moisture in the southeastern part of the grid at the Campbell site. This report is mainly a presentation of the original data which will contribute to the long-term monitoring of the ARCSS grid, which has been under the leadership of the late Kaye Everett, Ohio State University, Fritz E. Nelson, State University of New York at Albany (SUNY, Albany), and Jerry Brown, the International Permafrost Association.