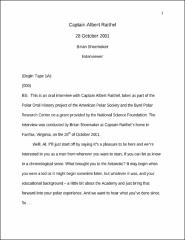 Capt. Raithel had a very short career with VX-6 during Deep Freeze II (1956-57). However, he flew one of the first P2V’s there and his narrative gives a good understanding of the development of P2V operations in Antarctica. After only one year flying with the squadron, he was transferred to the Naval Academy as an instructor. The following is pertinent: 1. Read about Byrd Expeditions in 1930’s 2. Was member of the first Air Scout Troop in Miami, Florida in 1943, attended Naval Academy and then flight training in 1953. 3. In 1954 Bernt Balchen invited him to fly in the Arctic with the USAF 10th Rescue Squadron – fell through because of the aircraft demands of the Korean War Airlift. 4. Volunteered for Deep Freeze in 1955 when the volunteer notice came out, but due to Administrative error was not selected. 5. In 1956 he appealed to Admiral Richard Black for orders to Antarctica. Black told Admiral Dufek and Dufek personally picked Raithel. In March 1956 he reported to VX-6. 6. He explains how Lockheed converted P2V’s to skis and explains how the skis operated in the field. 7. Al flew as co-pilot to Charlie Otti. Other P2V pilots were Jack Torbert, Stan Antos (USMC) and Jack Coley who had been on Ski Jump in the Arctic. 8. Briefly discusses the P2V crash at McMurdo that killed four people. 9. Relates story of Jack Otti and him picking up P2V at Lockheed Los Angeles and flying to New Zealand and thence McMurdo arriving on 3 January 1957. 10. Describes the first P2V flights to the South Pole. First was flown by Jack Torbert and Stan Antos. Raithel and Otti followed. 11. Planes were very overgrossed. Used 16 JATO for take-off at McMurdo and carried 16 more internally for take-off from South Pole. Landed at South Pole on 8 January. Mentions crew were Don Thomas ADR-1 (plane captain), Buzz Hudson (radioman) Ed Silberman (Navigator – USMC). 12. Discusses operation of the jets and reciprocating engines – jets burned av-gas. Had an integral heaters in each nacelle to warm the engines at low temperatures. 13. Returned to New Zealand on 13 January after only 10 day in Antarctica, due to failures of the attaching fittings in the aircraft ski system. Never returned. 14. Commented that Dufek was “sort-of” the Commanding Officer of VX-6. “Capt Cordinier and CDR Ward were more-or-less relegated to gofers.” 15. Ordered to Naval Academy shortly after returning to the United States due to completion of four continuous years of sea duty. 16. In 1957 he was ordered as advisor for air operations to work with Xavier deMaere of the Belgian Antarctic Program. Later in 1974 while he was assigned to NATO Staff in Brussels he again worked closely with Admiral deMaere.