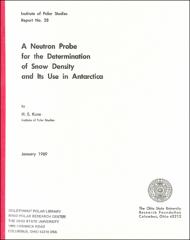 Institute of Polar Studies Report No. 28.

A neutron probe for the determination of snow density was designed and built for operation under field conditions. The probe contains a neutron source which emits fast neutrons. The neutrons lose their energy in the snow primarily because of collisions with the hydrogen nuclei. After several collisions, as many neutrons are scattered backward as forward, and some return to the detectors in the density probe. The detector output pulses are amplified, discriminated, and then transmitted to a recorder on the surface. The relationship between the neutron count rate and snow density was analyzed theoretically. The neutron probe was used to measure density profiles in boreholes drilled during the Queen Maud Land Traverse III, 1967-68, in Antarctica. The results are given from a 48-m-deep hole, at traverse mile 500 (76°22'S, 9° 32'E).