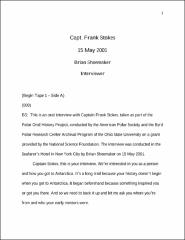 Capt Stokes became interested in Admiral Byrd after listening to the Admiral’s broadcasts during his expeditions. He graduated from the Naval Academy in 1953 and after his first tour of duty volunteered for Operation Deep Freeze. He was assigned to Little America in the fall of 1957 as the Communications Officer. He sailed from Seattle aboard the USS Atka via Christchurch to Little America at Kainan Bay. He gives good descriptions about life “On the Ice”. Mentions that Gus Shinn was their station pilot and that he spent the summer at Little America. Give a thorough accounting of the incident of Bert Crary falling into Kainan Bay when the ice front collapsed. Mentions “Little America College” and the regular lecture series that was involved. Little America was officially closed as a science base at the end of IGY (Dec 31, 1958), but Stokes was left behind with a close-out crew. He closed out the station on January 19, 1959 – he was the last to leave. He never had duty again in the Antarctic, but returned twice as a tourist in 1994 and 1995. The following is pertinent: 1. Listened to Admiral Byrd on radio as a young man. 2. While at Naval Academy wrote thesis on Admiral Byrd. 3. Volunteered for Deep Freeze after his first tour in fleet in 1957. 4. Was sent to Thule Greenland for survival school. 5. Was assigned as the Communications Officer to Antarctic Support Activities headed by Capt Pat Mayer. 6. He flew to Christchurch and boarded the USS Atka and headed for Kainan Bay. 7. He describes crashing two helicopters at Little America. 8. Slept in sleeping bag at first until previous winter crew left. 9. CDR Tommy Thompson was CO of Little America – Stokes boss. 10. Stokes was also Postal Officer requiring him to fly to Byrd Station and McMurdo. 11. Describes “Goober Beer”. 12. Discusses “All Hands” Club and fraternization with enlisted. 13. Discusses Antarctic Weather Central. 14. Describes the effect of sun-spots on communications. 15. States that there were four pilots assigned during the winter – they flew all winter. 16. He was duty officer when Bert Crary, the chief scientist in Antarctica, fell into Kainan Bay and was rescued by helicopter. He describes the incident in detail since he coordinated the rescue. 17. He discusses HAM Radio and its importance to morale. 18. Talks about the routine of steam-baths with others of the staff. 19. Frank and the scientists started “Little America College” which had lectures and movies every night. 20. He discusses the closing of Little America V. Stokes was the last man to leave. 21. Traveled to New Zealand on the USS Arneb 22. Returned to Ross Sea with Fuch and Hillary in 1994 as a tourist and again in 1995. 23. In 2001 Stokes joined a group from the Planetary Studies Foundation and Harper College to collect meteorites in Antarctica.