Interview of Charles A. Burroughs by Brian Shoemaker 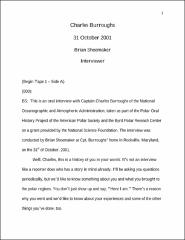 Capt. Burroughs was commissioned as an Ensign in the U.S. Coast and Geodetic Survey upon graduation from the University of Connecticut in 1958 and was immediately sent to Alaska aboard the R/V Patton, a small hydrographic survey ship. Later he was assigned to the Bering Sea aboard the R/V Pathfinder where they surveyed the coast of the Aleutian Peninsula while based at Dutch Harbor. He attended graduate school (Major in Geodetic Science) from 1962-63 at The Ohio State University. He then worked in triangulation fieldwork in the Arctic, including the establishment of the first Coast and Geodetic satellite triangulation station in the Arctic at Cambridge Bay, NWT in 1964 during the winter. He discusses his experiences while there and also talks about the remains of the M/V Maud, Amundsen's ship that rests in shallow water just offshore. In 1965, Capt. Burroughs performed reconnaissance for four more satellite triangulation stations on St. Lawrence Island, Shemya Island, Pt. Barrow and Cold Bay. These were important accomplishments because they laid the groundwork for more accurate photographic mapping systems of the Arctic Basin, as well as providing data for the establishment of a world –wide geodetic datum. After the C&GS was rolled into ESSA in 1965, and finally NOAA in 1970, he was given Command of the NOAA Ship Fairweather during 1973-74, where he made modern hydrographic surveys of the Cook Inlet and Glacier Bay, Alaska (utilizing automated hydrographic survey systems). From 1976 until he retired in 1985, he held a number of staff and administrative positions in NOAA Headquarters, including Chief of Staff to the Director of the NOAA Corps. This was a short, but good interview. As an aside it should be noted that Capt. Burroughs is still involved with mapping and has been an officer of numerous mapping societies including president of the Washington Map Society, editor The PORTOLAN, the Society newsletter/journal, and secretary of the U.S. Coast and Geodetic Society. He is an authority on The U.S. Exploring Expedition, 1838-42, commanded by Lt. Charles Wilkes that made significant discoveries of the Antarctic coastline. He has written a chapter in the Book Magnificent Voyages, The U.S. Exploring Expedition, 1838-42, Smithsonian 1985. The book details the relationship between the expedition and the fledgling Smithsonian and the perseverance of Admiral Wilkes, who for 40 years attended to the curation of the expedition collections.