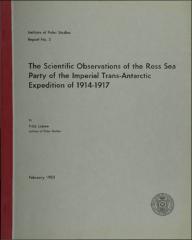 Institute of Polar Studies Report No. 5.

During 1915-1917 the Ross Sea Party of the Imperial Trans-Antarctic Expedition wintered in McMurdo Sound and sledged across the Ross Ice Shelf to the foot of the Beardmore Glacier. The meteorological observations made during this time, mainly at Cape Evans (77°38'S, 166°24’E), are discussed. It was found that the meteorological conditions differed little from those found during other years in McMurdo Sound. The mean annual temperatures were slightly higher than the average temperature over 12 years in McMurdo Sound. The temperatures from May to September were almost uniform. Except for midsummer, the temperatures rose with cloudiness and wind speed. In autumn, temperatures on the Ross Ice Shelf dropped very rapidly compared with those at the coast. As in earlier years, Cape Evans proved to be a windy place. Throughout the year most of the winds and almost all of the gales came from the southeast. During the winter the mean water vapor pressure was very close to equilibrium with an ice surface. Evaporation from a lake surface in winter was about 0.1 mm/day. The tides were of the mixed, prevailingly diurnal type. The spring tide range was about 125 cm.