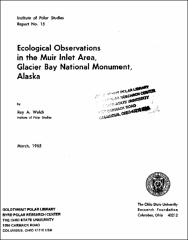 Institute of Polar Studies Report No. 15.

From observations conducted during the summer of 1962 concerning the habitat, species, and general successional stages of the plant and animal life in the area surrounding Muir Inlet (58°54' N. Lat.,136°05' W. Long.), it was apparent that the general increase in species southward, i.e., away from the retreating ice fronts, was largely related to the rate of glacial retreat. Vegetation graded from mosses and lichens near the glaciers to well-developed Sitka spruce (Picea sitchensis) in areas three to five miles or further from the nearest ice front. Although birds were plentiful throughout the area, mammals generally were found only in the more densely vegetated areas. Marine life was limited, and no large carnivores were observed. As both vegetation and wildlife appear to be rapidly migrating northward, further ecological observations in this area should yield valuable information on: 1. the rate of vegetative growth in deglaciated areas; 2. the rate at which wildlife migrates into these areas; 3. the relationships between ice, vegetation, and wildlife.