Observations of Vegetation in the Vicinity of Two Glacial Piedmont Lakes, Southern Patagonia 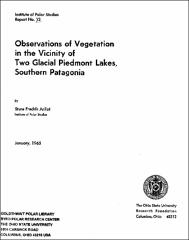 Institute of Polar Studies Report No. 13.

Southern Patagonia is generally considered to lie between 45°S and the Straits of Magellan. When Tierra del Fuego is added, the two (Fuego-Patagonia) form a land mass as far south as 56°S. The glacially formed lakes Argentino and Viedma were the principal areas of this investigation, which extended from the end of February through early May, 1963. Because of transportation difficulties few days were spent in the Lago Viedma area, with three days in the FitzRoy Valley. The remainder of the expedition, hampered by the lateness of the season, centered at the western end of Lago Argentino. Observations and descriptions of the geological provinces and vegetation are discussed.