Land Forms Produced by the Wastage of the Casement Glacier, Southeast Alaska 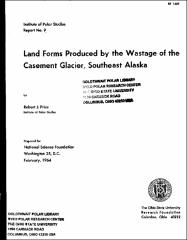 Institute of Polar Studies Report No. 9.

An area of 15 square miles between the terminus of the Casement Glacier and the shore of Muir Inlet, in the Glacier Bay National Monument, was studied for a period of eleven weeks during the summer of 1962 and revisited briefly in 1963. The Muir Inlet area contains numerous well-documented and rapidly retreating glaciers and has proved to be a most accessible laboratory for studies in deglaciation. Previous studies in this area revealed that the wastage of the broad ice-bulb terminus of the Casement Glacier has produced many meltwater channels, eskers, and kames. Aerial and ground photographs taken since 1907 have enabled the author to map the position of the ice front of the Casement Glacier at various stages of its wastage. By studying the available photographs and by mapping, in the field, the existing deposits and erosional forms, information has been obtained about the nature of ice wastage and the processes involved in the development of eskers and meltwater channels. The Casement Glacier has retreated from Muir Inlet across a ridge of Hysithermal gravels topped by Little Ice Age till. Since 1929 the ice front of the Casement Glacier has retreated down a "reverse-slope," i.e., the altitude at the base of the ice front has become progressively lower. Although the underlying topography was an obstacle to the free movement of meltwater from the Casement Glacier west to Muir Inlet, three major meltwater channels were established at an early stage and continued to function until an alternate route, south to Adams Inlet, was established. Glaciofluvial deposition was active on the "reverse-slope" and numerous eskers were formed. One large esker system was mapped in detail; gravel ridges 30 to 60 feet high form a complex system one mile long and half a mile wide. Photographic evidence and the form of this and other esker systems studied indicate that most of the eskers developed in supraglacial or englacial streams. Since the Casement Glacier began to terminate on land in 1907, it has retreated a maximum of four miles to its 1963 position. From Reid's plane-table map of the Muir Inlet Region in 1890-92, it is possible to calculate that in one locality ice 800 feet thick wasted away in 39 years. This is an average of approximately 20 feet per year, a figure comparable to the wastage of 18 feet per year determined by comparing a photograph taken in 1948 with the conditions in 1962. The construction of maps from the 1946 and 1948 aerial photographs enabled a detailed analysis of the morphological changes that have taken place near the ice margin between 1946 and 1963. Since 1946 glaciofluvial erosion, rather than glaciofluvial deposition, has been dominant.