Densification and Recrystallization of Firn at Dome C, East Antarctica 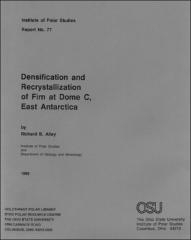 This study reports on variations of density, crystal size, and crystal shape-with-depth to 50 m for Dome C, central East Antarctica. The critical point in the depth-density profile is less sharply defined than at other locations. Benson's model for variation of pore space with depth provides an adequate, but not perfect, description of the observed behavior. An empirical relation discovered by Gow for dependence of depth-density profiles on temperature and accumulation cannot be extended to the low-temperature, low-accumulation conditions of Dome C. The observed profile differs from log-linear densification expected for unconfined sintering of ceramics in a manner which is explicable if load has an important effect on densification. The relative behavior of the Dome C and South Pole age-density profiles also shows that load is an important parameter in firn densification. The core consists of dense, fine-grained wind crusts contained in more-extensive, less-dense, coarse-grained firn. Density ranges between superjacent coarse and fine layers decrease exponentially with depth. Lower rates of densification are observed for fine-grained firn because such firn has greater area of grain boundary per unit volume than coarse firn, and better resists deformation under load. A simple unconfined sintering model for densification predicts more rapid densification of fine firn, and thus is shown to have limited applicability. Load and mean annual temperature are probably the controlling factors in firn densification between 5 m and 50 m depth. The rate of growth of crystals in fine layers is almost three times that of crystals in coarse layers. The rate of growth of coarse crystals agrees well with that predicted by Gow. Variations in crystal sphericity, internal free surface, and crystal boundary area with depth reveal that coarse-grained firn consists of several genetically-different types of firn. Thin sections of firn may be prepared using the nontoxic chemical dodecane as a filler. To determine mean crystal area in a section, the 50 largest crystals following the 5 largest crystals should be measured, such that about 25% of the crystals in a section are measured.