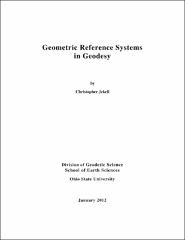 This text covers all aspects of terrestrial and celestial coordinate reference systems and frames in geodesy, from historical geodetic datums to modern (current) national and international reference systems and the transformations between them. The exposition is divided into essentially two parts, the first devoted to the terrestrial reference systems, and the second to the celestial reference systems, where the focus of the latter is primarily on the transformation to the former. The geometry of the ellipsoid is covered in detail, as well as astronomic coordinates and astrogeodetic methods. The North American Datum is used to illustrate the evolution and the changing paradigms of geodetic control well into this century. The new reference system conventions recently (2003, 2010) adopted by the International Astronomical Union (IAU) and the International Earth Rotation and Reference Systems Service (IERS) are included explicitly and contrasted with the old systems and realizations. Emphasis is on the definition and methodology of coordinate transformations and less on the deeper theory of the Earth dynamics that impose careful implementation for highest accuracy. The adjective, geometric, in the title of this text, also implies that no attempt is made to introduce the Earth's gravity field, which historically formed such an integral part of geodetic control. Therefore, the vertical datum (still important for many applications) is covered only briefly, relegating it to other more appropriate venues (such as a study of Earth's gravity field). The text concludes with a comprehensive discussion of time (the fourth dimension), which is also treated as a reference system.