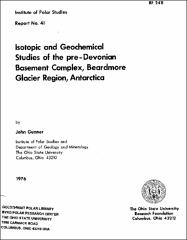 Institute of Polar Studies Report No. 41.

This report describes the results of an investigation of the age and origin of two units of the pre-Devonian Basement Complex of the Beardmore Glacier region, central Transantarctic Mountains. The first part of the study is an attempt to date, by the rubidiumstrontium method, the time of sedimentation and regional metamorphism of the Nimrod Group, a sequence of high-grade metasediments which are probably the oldest rocks exposed in the region. The second part of the study is an attempt to determine by isotopic and geochemical methods the origin and magmatic development of the Granit Harbor Intrusives, a suite of granitic intrusions that were emplaced in the Basement Complex of the Transantarctic Mountains during the Cambro-Ordovician Ross Orogeny. In order to document the magmatic development of the intrusions 40 K-feldspar separates from selected samples were analyzed for K, Na, Ca, Rb, Sr, and Ba. The results of this part of the study are synthesized in a hypothetical history of the later part of the Ross Orogeny from the anatectic generation of granitic magma to the crystallization of the last, most differentiated liquids.