A 200-Year Record of Glacier Mass Balance at Deception Island, Southwest Atlantic Ocean, and Its Bearing on Models of Global Climatic Change 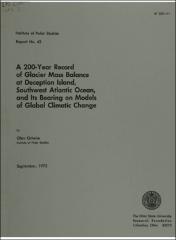 Institute of Polar Studies Report No. 42.

Subglacial volcanic eruptions on Deception Island (63°S, 60°40'W) in 1969 and 1970 revealed ice stratigraphy in fissures and craters. Annual net mass-balance variations from about 1780 A.D. to the present were determined from this stratigraphy. Annual layers were exceptionally well marked by dirt layers, formed each summer when large amounts of dust are blown onto the glaciers from surrounding areas of loose volcanic material. No dust is deposited on the glaciers in the winter because the island is then completely snow-covered. The sections studied originated high in the accumulation area of the glacier, and only minor errors in the record are caused by years missed due to zero or negative net balance. Meteorological data are available from Deception Island from 1944 to 1967; summer degree-days for these years are significantly negatively correlated with stratigraphically determined net mass balances (r= -0.55, P < 0.01). This correlation generally becomes insignificant when dating of the layers is changed by one or more years and thus provides a confirmation of the stratigraphic technique. The correlation also shows that summer degree-days and summer balances must be closely correlated; year-to-year variations in the summer balances, as represented by the summer degree-days, account for a larger proportion of annual net balance variations than do winter balance variations. Close correlation between summer degree-days and summer balances is supported by heat- and mass-balance results on a selected glacier on the island. This glacier was in mass equilibrium for the 1968-1969 balance year but had negative mass balances for the following two years. Shortwave solar radiation contributed most of the heat transfer to the glacier in the summer. Mean gradients with respect to elevation of the summer, winter, and net balance curves are 6, 1, and 7 mm m-1, respectively. The term "mean activity index" is proposed for the latter gradient, and its use is suggested in place of Shumskii's "energy of glacierization" and Meier's "activity index." The stratigraphic studies revealed 23 probable volcanic eruptions since 1780. Although these eruptions have changed significantly the mass and heat balance conditions in the ablation area of the glaciers, their effects were not significant in the accumulation areas, where the ash is buried within a year. Comparisons between summer temperatures at Deception Island and those of 14 other stations in middle to high latitudes in the southern hemisphere show that summer temperature variations at Deception Island are representative of regional variations in the southwest Atlantic Ocean. Mean mass balances for 5-year intervals, and 5-year running means of balances for Deception Island are significantly negatively correlated with observed mass-balance variations from 1946 in the northern hemisphere, and balances in both hemispheres show a marked cyclicity of about 10 years. The same antiphase relationship, with a cycle of 11 years, and a weaker cycle of about 20 years, is found when the entire Deception record is compared with the precise record back to l8l6 from Storbreen, Norway. The entire Deception Island record shows the same general atmospheric warming from the 19th to the present century, as occurred in the northern hemisphere and in lower to middle latitudes of the southern hemisphere. Models proposed to explain climatic changes must account for a global warming from late last century to about 1940, and an antiphase cyclic relationship, characterized by dominant periods of about 11 and about 20 years, in the climatic elements that affect glacier mass balances in middle to high latitudes in the two hemispheres.