Timbral Environments: An Ecological Approach to the Cognition of Timbre 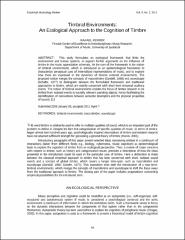 This study formulates an ecological framework that links the environment and human systems, to support further arguments on the influence of timbre in the music appreciation schemata. At the core of the framework is the notion of timbral environments, which is introduced as an epistemological foundation to characterize perceptual cues of internalized representations of music, and to explore how these are expressed in the dynamics of diverse external environments. The proposed notion merges the concepts of macrotimbre (Sandell, 1998) and soundscape (Schafer, 1977) to distinguish between the formulated framework and traditional approaches to timbre, which are mainly concerned with short-term temporal auditory events. The notion of timbral environments enables the focus of timbre research to be shifted from isolated events to socially relevant sounding objects, hence facilitating the identification of connections between semantic descriptors and the physical properties of sounds.