The Transpiration Stream and Upward Translocation of Mineral Ions 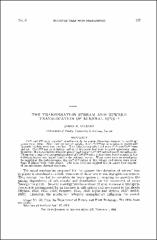 Ca46 and P32 were supplied simultaneously to young Phaseolus vulgaris L. seedlings grown in solution. After short periods of uptake, the Ca45/P32 ratios in opposite leaves and opposite leaflets were very similar. This relationship also held when Ca45 and Cs137 were paired. Ca45/P32 ratios in lateral halves of the same leaf were in good agreement, also. However, the basal halves of leaves always had higher Ca4B/P32 ratios than terminal halves. There was a negative acropetal gradient of Ca45/P32 ratio in the stem, but the ratio in the trifoliate leaves was higher than in the primary leaves. When roots were removed prior to supplying the radioisotopes, the Ca45/P32 ratios in the foliage and stems were lower than in plants with roots intact. The data obtained support the en masse flow concept of ion movement through the stem.