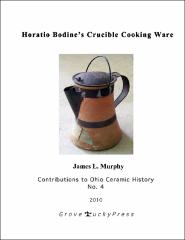 Contributions to Ohio Ceramic History : No. 4

Horatio R. Bodine (1826-1883) was an enterprising Muskingum County, Ohio, potter with several patents to his credit. Two of his sons continued the potting tradition, George H. Bodine (1858-ca. 1905) and Greenbury W. Bodine (1863-1896). The family’s best known product was "Bodine’s Crucible Coffee Pot," manufactured in Zanesville from at least 1883 to 1890 by George H. Bodine. It is unclear whether Horatio R. Bodine produced these earlier or whether Greenbury Bodine continued their manufacture at his South Zanesville pottery after his brother turned to paving brick manufacture. Other examples of Bodine’s patented Crucible cooking ware are also described and illustrated.