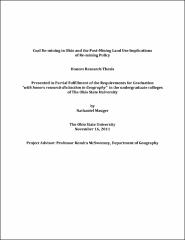 The term "remining" refers to the removal of viable coal reserves from abandoned mine sites that were mined prior to the passage of state and federal environmental legislation governing reclamation standards. This practice most frequently occurs on sites abandoned between 1940 and 1970, when surface mining became a transformative force on the southeastern Ohio landscape. Ohio’s abandoned surface and underground mines are a symptom of years of unrestrained degradation inflicted on the coal bearing regions of Appalachia. Prior to the enactment of the Ohio’s B-Mine law in 1972, Ohio coal operators bore little to no responsibility for post-mining restoration. Today, the remaining coal reserves in this scarred landscape are attractive to modern coal operations whose mining practices are sufficiently advanced to allow for coal extraction. Identifying the presence of remining sites poses problems for researchers interested in studying their features because remining operations occurred for decades, escaping distinction in the conventional regulatory process. Geographers are uniquely suited to address this problem by enlisting spatial analysis techniques with remote sensing imagery to uncover the locations of remining sites and identify the characteristics of their changing land-use. The development of a GIS model for identifying remining sites would be of great use to ecologists, geographers, landscape historians, and engineers who research reclamation and land-use change. Once modern reclamation standards were put in place, the vast majority of reclaimed sites (both remined and virgin), demonstrate land uses consistent with the terms "undeveloped", "grassland", "pastureland", or "cropland". Though the planting of fast growing-grasses and shrubs satisfies the requirements of 1977’s Surface Mining Control and Reclamation Act and is believed to decrease costs for coal operators in the region, one is left to consider whether this constructed land-use is preferred by all actors in the remining process. In the case of remining sites, land-use preferences by public and private landholders are especially intriguing in light of the longstanding state of degradation under which these sites have been exposed.Proceeding from an understanding of the remining process and how to identify remining on the landscape, I examine re-mining’s place within the framework of political ecology. Because remining is swiftly becoming a new transformative force on the southeastern Ohio landscape, political ecologists have a unique opportunity to study the simultaneous destruction and construction of environmental systems and landscapes. Areas that have been mined and abandoned prior to the enactment of SMCRA infrequently demonstrate resiliency in the face of ongoing water quality and sedimentation concerns. Still, many pre-law sites pose real risks to local populations both of humans and wildlife from acid mine drainage, limited buffering capacities, ongoing sedimentation, and dangerous highwalls. Because the degradation brought on by historic pre-law mining operations serve as symptoms of the prior negligence of both the state and industry, the process through which this landscape is re-engineered should be evaluated in order to discern the goals of local populations, the state, and corporate actors.