Ecological Processes at a Section of Shoreline of South Bass Island, Lake Erie 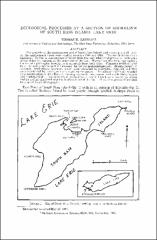 The tombolo at the northeastern end of South Bass Island, and a contiguous till bank on the southeastern shore were studied between 1936 and 1963. The bar of the tombolo represents the line of convergence of waves from the east which had passed on both sides of the dolomitic outcrop at the outer end of the bar. Waves from the west, approaching the bar at right angles, brought to it materials from both sides. Changing levels of Lake Erie alternately submerged and exposed the bar for prolonged periods. During periods of exposure, many plants appeared, which were subjected to overriding sheet-ice and then were eliminated by subsequent prolonged submergence. The adjacent till bank receded by a combination of the effects of shoving ice, frost, rain, waves, and winds (dehydration and sand-blasting). Boulders which washed out of the till bank were moved by waves and ice and accumulated near the landward end of the bar. These changes are illustrated by a set of dated photographs.