Attention Performance in an Epidemiological Sample of Urban Children: The Role of Gender and Verbal Intelligence 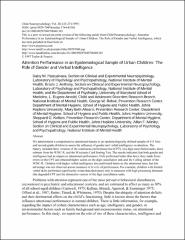 We administered a comprehensive attentional battery to an epidemiologically defined sample of 435 first and second-grade children to assess the influence of gender and verbal intelligence on attention. The battery included three versions of the continuous performance test (CPT), two digit cancellation tasks, three subtests from the WISC-R, and the Wisconsin Card Sorting Test. The results indicated that both gender and intelligence had an impact on attentional performance. Girls performed better than boys; they made fewer errors on the CPT and obtained higher scores on the digit cancellation task and the Coding subtest of the WISC-R. Children with higher verbal intelligence also performed better on the attentional tests, but this advantage was not observed across measures or levels of performance. For example, children with limited verbal skills performed significantly worse than their peers only in measures with high processing demands(the degraded CPT and the distraction version of the digit cancellation task).