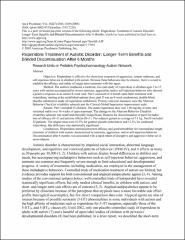 Objective: Risperidone is effective for short-term treatment of aggression, temper outbursts, and self-injurious behavior in children with autism. Because these behaviors may be chronic, there is a need to establish the efficacy and safety of longer-term treatment with this agent. Method: The authors conducted a multisite, two-part study of risperidone in children ages 5 to 17 years with autism accompanied by severe tantrums, aggression, and/or self-injurious behavior who showed a positive response in an earlier 8-week trial. Part I consisted of 4-month open-label treatment with risperidone, starting at the established optimal dose; part II was an 8-week randomized, double-blind, placebo-substitution study of risperidone withdrawal. Primary outcome measures were the Aberrant Behavior Checklist irritability subscale and the Clinical Global Impression improvement scale. Results: Part I included 63 children. The mean risperidone dose was 1.96 mg/day at entry and remained stable over 16 weeks of open treatment. The change on the Aberrant Behavior Checklist irritability subscale was small and clinically insignificant. Reasons for discontinuation of part I included loss of efficacy (N=5) and adverse effects (N=1). The subjects gained an average of 5.1 kg. Part II included 32 patients. The relapse rates were 62.5% for gradual placebo substitution and 12.5% for continued risperidone; this difference was statistically significant. Conclusions: Risperidone showed persistent efficacy and good tolerability for intermediate-length treatment of children with autism characterized by tantrums, aggression, and/or self-injurious behavior. Discontinuation after 6 months was associated with a rapid return of disruptive and aggressive behavior in most subjects.