Risperidone for the Core Symptom Domains of Autism: Results From the Study by the Autism Network of the Research Units on Pediatric Psychopharmacology 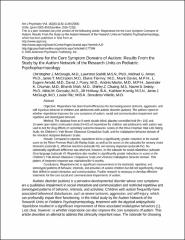 Christopher J. McDougle et al, "Risperidone for the Core Symptom Domains of Autism: Results From the Study by the Autism Network of the Research Units on Pediatric Psychopharmacology," The American Journal of Psychiatry 162, no. 6 (2005)

Objective: Risperidone has been found efficacious for decreasing severe tantrums, aggression, and self-injurious behavior in children and adolescents with autistic disorder (autism). The authors report on whether risperidone improves the core symptoms of autism, social and communication impairment and repetitive and stereotyped behavior. Method: The database from an 8-week double-blind, placebo-controlled trial (N= 101) and 16-week open-label continuation study (N=63) of risperidone for children and adolescents with autism was used to test for drug effects on secondary outcome measures: scores on the Ritvo-Freeman Real Life Rating Scale, the Children’s Yale-Brown Obsessive Compulsive Scale, and the maladaptive behavior domain of the Vineland Adaptive Behavior Scales. Results: Compared to placebo, risperidone led to a significantly greater reduction in the overall score on the Ritvo-Freeman Real Life Rating Scale, as well as the scores on the subscales for sensory motor behaviors (subscale I), affectual reactions (subscale III), and sensory responses (subscale IV). No statistically significant difference was observed, however, on the subscale for social relatedness (subscale II) or language (subscale V). Risperidone also resulted in significantly greater reductions in scores on the Children’s Yale-Brown Obsessive Compulsive Scale and Vineland maladaptive behavior domain. This pattern of treatment response was maintained for 6 months. Conclusions: Risperidone led to significant improvements in the restricted, repetitive, and stereotyped patterns of behavior, interests, and activities of autistic children but did not significantly change their deficit in social interaction and communication. Further research is necessary to develop effective treatments for the core social and communicative impairments of autism.