The Waves of Lake Erie at South Bass Island 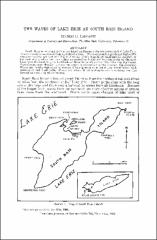 South Bass is an island with a two-lobed outline near the southwest end of Lake Erie. It is composed of eastward-dipping dolomite rock. Wave erosion has produced high cliffs, characterized by spurs alternating with coves, which often have small pebble beaches, on the west shore, while low rock ridges separated by banks and beaches occur on the east. Locally on the west, large fallen blocks of dolomite partly protect the cliffs from the waves. On the east shore, flotsam is one of the major factors affecting the nature of the shoreline. Waves are locally dampened by masses of tape grass and, in winter, by water heavy with snow-curds and slush-balls. Cusps and cones of ice and splash-ice structures are also formed on shoals by winter waves.