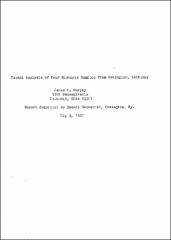 Faunal remains retrieved from four rectangular, wood-lined privies encountered during the excavation of the Bromley pottery and the Hemingray glass works in Covington, Kentucky, have been analyzed. Total sample size is 6423 items, though number of items and degree of preservation varies considerably among the four features. Slightly more than half of this sample (3421 items, 533%) could be identified to the species level. Dating roughly to the mid 19th Century (Features 45 and 81) and to the turn of the century (1900) (Features 47 and 53), this material invites comparison with samples previously obtained from the Queensgate II project across the Ohio River in metropolitan Cincinnati (Dyer 1983). To judge from the limited data available, beef was a relatively more important source of meat in the Queensgate area, followed by pork and sheep, in markedly varying amounts. In the Covington samples pork unquestionably dominates Feature 81, dating to the late 1850s and early 1860s, followed by beef and chicken. Samples dating to ca. 1900 (Features 45, 47, and 53) indicate relatively equal amounts of beef and pork, perhaps suggesting that pork had become a less preferred meat staple by this time.