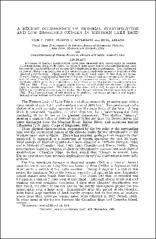 Instances of thermal stratification have been detected only occasionally in western Lake Erie during the past 40 years, but when it does occur it is of considerable importance because of associated dissolved oxygen (DO) depletion in the hypolimnion. Data collected in June of 1963 give an indication of the meteorological conditions necessary to produce this thermal stratification. These conditions are: daily wind speed of less than 3.1 m/sec (7 mph); highest wind speed of less than 6.7 m/sec (15 mph); and an average daily temperature of more than 18.5 C for approximately 5 consecutive days. Weather records for Sandusky, Ohio, show these conditions to have occurred on 33 separate occasions between 1953 and 1963. These data suggest stable thermal stratification occurs more frequently than heretofore suspected. The 1963 data also show that in only 5 days of stratification DO in the hypolimnion was reduced to less than 3 ppm, whereas 28 days were required in 1953. This increased rate of DO depletion is probably due to an increase in the oxygen demand of the bottom sediments in recent years.