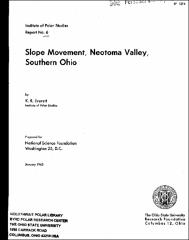 Institute of Polar Studies Report No. 6.

Fifty-three pits were dug along a transect of Neotoma Valley so as to sample both the southwest-facing and northeast-facing slopes. Each pit was dug to a depth of 59 cm and samples were taken from the 0-, 15-, 30-, and 59- cm levels and mechanically analyzed. Three bore holes in the valley bottom reached six meters and samples also were mechanically analyzed. On the southwest-facing slope, phi mean diameter decreased down slope. No such relationship was apparent for the northeast-facing slope. Average sorting increased down slope on the southwest-facing slope but, again, no trend was apparent on the opposing slope. No correlation was found between these parameters and percent slope. However, a definite correlation was found to exist between both average sorting and phi mean diameter for both slopes when plotted against slope length. Special instrumentation was designed to measure and record the distance, rate, and time of soil movement, as well as the co-existing physical conditions in Neotoma Valley. Linear motion potentiometers with a sensitivity of 0.03 mm were held in flexible stanchions attached to pipes anchored in bedrock at four sites. Small aluminum plates were buried in the slope and connected to the shaft of the potentiometer by an aluminum rod. Movement of the soil against the plate caused displacements of the potentiometer shaft and a resistance change. Coleman soil moisture units containing thermistors were placed at the same depth near the aluminum plates. Resistances from both the Coleman units and potentiometers were measured by a modified Wheatstone Bridge. The general form of Neotoma Valley is bedrock controlled. It has been modified during the Pleistocene by the deposition of slack-water silt and clay which form terraces on the lower slopes. Sheet-wash and rill-wash are effective in removing surface material down the slopes. Blow-down is a major agent in the denudation of the northeast-facing slope. Data from clay cylinders buried 37 months and from the transducer sites indicate the down slope movement of the mantle proceeds discontinuously in space and time. Individual movements can amount to 0.5 mm and are closely related to change in soil moisture (that is, wetting and drying of the soil), but freezing probably plays no role. Maximum movement rates indicate that, under present conditions, down slope movement is in the order of 8.2 meters per 1000 years.