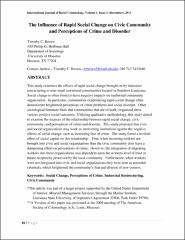 This study examines the effects of rapid social change brought on by industrial restructuring to nine small town/rural communities located in Southern Louisiana. Social change is often found to have negative impacts on traditional community organization. In particular, communities experiencing rapid social change often demonstrate heightened perceptions of crime problems and social disorder. Other sociological literature finds that communities that are civically organized show various positive social outcomes. Utilizing qualitative methodology, this study aimed to examine the nuances of the relationship between rapid social change, civic community, and perceptions of crime and disorder. This study proposed that civic and social organizations may work as intervening institutions against the negative effects of social change, such as increasing fear of crime. The study found a twofold effect of social capital on this relationship. First, when incoming workers are brought into civic and social organizations then the civic community does have a dampening effect on perceptions of crime. However, the integration of migrating workers into these organizations was dependent upon the workers level of trust or future reciprocity perceived by the local community. Furthermore, when workers were not integrated into civic and social organizations they were seen as potential criminals, which heightened the community’s fear and distrust of new-comers.