The Distribution of Fresh-Water Triclad Planarians in Jefferson County, Ohio 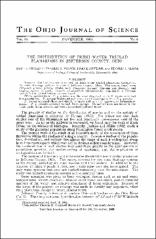 Seasonal distributions are described for fresh-water triclad planarians throughout the main drainage systems of most of Jefferson County, Ohio. The species found were Phagocata gracilis gradlis (Haldeman), Phagocata morgani (Stevens and Boring), and Dugesia tigrina (Girard). Dugesia dorotocephala (Woodworth), apparently a common species in the United States, was not found. Of the species found, P. g. gracilis was the most abundant, while D. tigrina occurred less abundantly. P. morgani was found rarely and only in association with P. g. gracilis. D. tigrina occurred characteristically in lakes and ponds of appreciable temperature ranges. P. g. gracilis occurred in cool, fresh springs. Planarians were not found in the large, swift, main streams and were absent from polluted water.