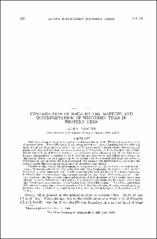 Soils have been an important tool in the interpretation of the Wisconsin glacial history of western Ohio. Five different tills are recognized in this area, identified by five different soils, which are distinquished on the basis of (1) presence or absence of silt (loess) cap, (2) amount of clay in B horizon, (3) amount of clay in C horizon, and (4) depth of soil profile. Where the critical difference between two adjacent soils relates to one of the first three factors, composition is considered to be the explanation; where the difference is based on the fourth factor, one soil appearing to be deeper and more weathered than the other, a difference in age between the tills is inferred, the younger till interpreted to represent the deposit made during a major readvance of the retreating glacier. Careful evaluation of the differences between each set of adjacent soils reveals the following Wisconsin glacial history: after the very long Sangamon Interglacial, the "early" Wisconsin glacier appeared, only locally extending beyond the limits of younger deposits, followed, after a moderately long ice-free period, by the "late" Wisconsin glacier. During recession, this last glacier deposited a series of end moraines, with a major readvance (judged by soils differences) marked by the Farmersville-Reesville Moraines, and a less significant readvance marked by the Union City-Powell Moraines. The retreat preceding this last readvance must have extended north of the Ohio divide, allowing formation of an ice-front lake in which clay could accumulate, for the till subsequently deposited is rich in clay.