The Annual Distribution and Stratification of Phytoplankton at Aurora Lake, Portage County, Ohio 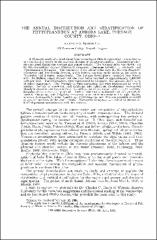 A 13-month study of a hard-water lake in northeast Ohio has provided a quantitative and qualitative record of the seasonal changes of the phytoplankton. Maximum production occurred during the summer and winter periods. The summer pulse was dominated by the cyanophyte species: Microcystis aeruginosa, Anabaena spiroides, A. circinalis, and A phanizomenon flos-aquae. The dominants of the winter pulse were the diatoms Fragilaria crotonensis and Asterionella formosa, which formed separate peaks under an ice cover in December and January, respectively. The January development extended into March with the highest concentrations for the year being reached at approximately 1,400,000 cells per liter. The Chlorophyta were represented by 34 species, but quantitatively were of minor importance. The Pyrrophyta were uncommon and were represented by only 3 species. Periods of maximum and minimum phytoplankton development correspond closely in duration and magnitude at the surface and at one meter, with a slight tendency for pulses at two meters to lag behind. Vertical distribution indicated that the cyanophyte species, Phacus sp., and Fragilaria crotonensis were more numerous in the upper layers, whereas Asterionella formosa, Synedra sp., Closterium sp., and Melosira granulata occurred in greater numbers in the lower strata. Microcystis aeruginosa was noted to change its level of greatest concentration with the seasons.