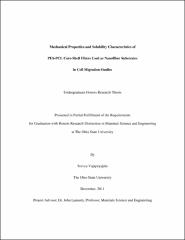 Culturing cells in 3D has been recognized as crucial for accurate data collection and interpretation. Electrospun nanofiber substrates are currently accepted by the scientific community as media that provide a 3D cell culture environment, or at least close to it. Previous and ongoing research in this area has mainly focused on characterizing nanofiber substrates composed of a single type of polymer such as PCL. Limited information exists on the mechanical and chemical properties of core-shell fibers that show great potential for application as drug delivery systems and tissue engineering scaffolds. This project was designed to expand available knowledge on core-shell fibers and their characteristics. To this end, electrospun PES-PCL core-shell fibers of varying core to shell volume ratios were tested in tension. The resulting data revealed that as the PCL (shell) content increases, the overall stiffness of the core-shell fibers also increases. In addition to tensile testing and SEM analysis, various solubility tests were conducted to identify a solvent that preferentially dissolves PCL over PES. This would help in future work to determine if the distinguishing properties of core-shell fibers are a result of the unique core-shell interactions or if they are simply the summation of individual core and shell properties. The following solvents were used in the solubility tests: Tetrahydrofuran (THF), chloroform, dichloromethane (DCM), and trichloroethylene (TCE). Of the solvents used, TCE showed the most selectivity for PCL. Pure PCL dissolved 100% in TCE while pure PES was mostly insoluble. However, PES-PCL core-shell fibers, though they exhibited greater solubility with increasing PCL content, did not exhibit weight loss proportional to % PCL content. SEM analysis revealed that exposing PES-PCL core-shell fibers to TCE results in webbing, which could have been the reason complete dissolution of PCL was not observed. This hypothesis was confirmed by solubility tests and subsequent SEM analysis of PCL/PES blends.