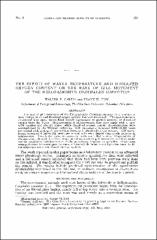 The rate of gill movement of the Hellgrammite Corydalus cornutus as a function of water temperature and dissolved oxygen content has been measured. The specimens were introduced into open, water-filled vessels subsequent to partial removal of dissolved oxygen from the water. Measurements of gill-movement rate were made with a hand tally counter and electric timer, while dissolved oxygen content determinations were accomplished by the Winkler technique. Gill movements increased 0.026±0.018 beats per second with each parts per million decrease in dissolved oxygen content. Gill movements increased 0.188±0.081 beats per second with each degree Centigrade increase in temperature. This latter value is consistent with van't Hoff's rule. Observations of the specimens showed that there was a strict sequence to gill movement and that, under certain conditions, bubbles formed at the presumably inoperative spiracles. Dissections were performed to investigate the cause of this bubble formation and gas was found to fill the major portion of the closed tracheal system.