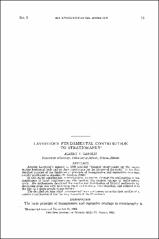 Antoine Lavoisier's memoir of 1789 entitled "General observations on the recent marine horizontal beds and on their significance for the history of the earth" is the first detailed account of the fundamental principle of transgressive and regressive overlaps, usually attributed to Amedeus W. Grabau (1906). In this major contribution to stratigraphy, Lavoisier, through his explanation of the significance of basal conglomerates, also reached the modern concept of sedimentary cycle. He furthermore described the mechanical distribution of littoral sediments by decreasing grain-size with increasing depth and distance from shoreline, and related it to the idea of a shore profile of equilibrium. The detailed sections which accompanied Lavoisier's essay gave the first outline of a correct classification of the Tertiary deposits of the Paris basin.