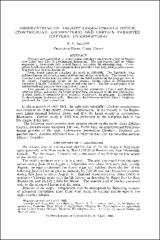 The ugly-nest caterpillar, A. cerasivoranus completes one cycle in a year at Eaglesnest Lakes near Ely, in northeastern Minnesota. The egg masses, laid on Prunus virginiana L., from early July to mid-August, constitute the wintering stage. Caterpillars hatch about June 1 and complete their growth by late July, with pupation occurring from late June to August 10. Seven insect parasites attacked the moth in 1959-1961. The Tachinid, Actia diffidens Curran, inhabited as many as 88 per cent of the caterpillars. The second instar attaches itself to the host mesopleura, and the third matures in the prepupal host in its cocoon. Pupariation occurs on the ground. Seven adults of Dichaetoneura leucoptera Johnson, Tachinidae, were reared from nests. The larvae and pupae of an unidentified egg parasite were found about June 1. Two species of Ichneumonidae, Labrorychus prismaticus (Nort.) and Exochus albifrons Cress., parasitize the larger caterpillars, and pupate in the host chrysalises. A third, Itoplectis conquisitor (Say) probably oviposits in the prepupae. It completes its development in the chrysalis. Females of Ancistrocerus antilope (Panz.), Vespidae, paralyzed the larger caterpillars.