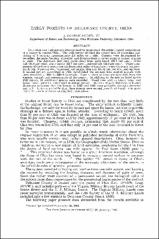 Data from two land surveys were utilized to reconstruct the original forest composition of a county in central Ohio. The 1832 survey divided the county into 12 townships consisting of 5 sections approximately 2.5 miles on a side. Corners were determined by recording the name, bearing, diameter, and distance from a survey point or corner, of pairs of trees. The dominant (per cent basal area) trees were beech (35.7 per cent), white oak (16.0 per cent), sugar maple (15.7 per cent), and red oak (14.0 per cent). Other components of the forest vegetation (in decreasing order of basal area) were white ash, hickory, black oak, American elm, basswood, soft maple, blue ash, black ash, red elm, and buckeye. A second survey, completed in 1835, subdivided the sections into smaller parcels with trees recorded at 200- to 500-ft intervals. Four of these sections are described from the eastern, central, and western parts of the county. In addition to the species listed in the 1832 survey, 10 additional species were recorded. Weed trees such as black locust and honey locust were not mentioned in either survey. Analysis of pair distances and stem diameters indicates that the forests of 1832 and 1835 were probably straight-stemmed and tall. It is not probable that these forests were second growth, although it is quite likely that some selective cutting had taken place.