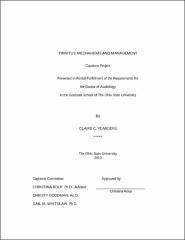 Tinnitus is the perception of sound in the absence of external auditory stimuli. Patients experiencing tinnitus often describe it as a buzzing, hissing, whistling, chirping, or roaring sound. Tinnitus is a most accurately described as a symptom, not a disease. Tinnitus is often benign; however it can cause psychological distress in some patients or be a symptom of an underlying pathology. Tinnitus is estimated to affect somewhere between 40 to 50 million Americans. Of the approximately 40 million Americans that experience tinnitus it is estimated that around 10 million people seek medical intervention because their tinnitus is so severe or troubling that it is negatively impacting the productivity and quality of their lives. Popular belief holds that tinnitus cannot be cured, but rather the underlying pathology can be treated or people can be educated and given tools to live more comfortably with their tinnitus. This paper will present a thorough review of the processes underlying tinnitus and the audiologic management of tinnitus.