Official Proceedings of the One Thousand Three Hundred and Thirty-Seventh Meeting of the Board of Trustees, Columbus, Ohio, December 5, 1997 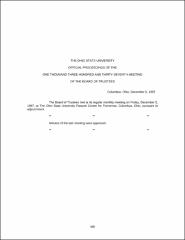 This item is the meeting minutes of the Board of Trustees of The Ohio State University held on Friday, December 5, 1997, at the Ohio State University Fawcett Center for Tomorrow, Columbus, Ohio. Topics discussed at the meeting included the president's report, the consent agenda, administrative restructuring, naming of school and new degree programs in the College of Pharmacy, honorary degree, personnel actions, resolutions in memoriam, report of research contracts and grants, the authorization for 1998 small capital improvement projects, the employment of architects/engineers and request for construction bids, report of award of contracts and establishment of contingency funds, non-mandatory transfers from current funds FY 1996-1997, agreement with Research Park Corporation - establishment of the Science and Technology campus, modifications of non-endowment investments policy, the University development report, the authorization, issuance and sale of variable rate demand general receipts bonds - series 1997 of the Ohio State University, the student recognition award, the presentation on the leadership agenda for FY '98, the student government reports, report on the status of the search and transition processes, the appointments of interim president and acting senior vice president and provost, and the farewell to president Gee.