Official Proceedings of the One Thousand Three Hundred and Second Meeting of the Board of Trustees, Columbus, Ohio, May 6, 1994 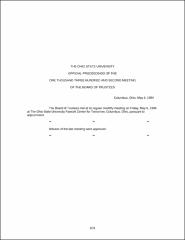 This item is the meeting minutes of the Board of Trustees of The Ohio State University held on Friday, May 6, 1994 at the Ohio State University Fawcett Center for Tomorrow, Columbus, Ohio. Topics discussed include the election of Officers, Committee appointments for 1994-1995, the President's Report, an update on the University restructuring by Provost Richard Sisson, the Research Foundation report, the Report of Research Contracts and Grants, the Report on the Ohio State University Foundation, the Hospitals Board Report, The Arthur G. James Cancer Hospital and Research Institute Board appointments, the Educational Affairs Committee Report, the authorization to initiate a computer laboratory fee in the College of Business, the authorization to continue to implement a computer laboratory fee in the College of Engineering, degrees and certificates awarded for Spring quarter commencement, Personnel Actions, the Investments Committee report, a refinancing of the debt of River Road Hotel Corporation by the OSU Endowment Fund, a Report on University Development, the establishment of named endowment and scholarship funds, an expression of appreciation for a student serving as President of the Council of Graduate Students and a student serving as President of the Undergraduate Student Government during the past year, reports from student government presidents the Fiscal Affairs Committee report, Waivers of Competitive Bidding Requirements, Request for Construction bids, the Sale of Real Property, the 1994-95 Current Funds Budget Guidelines, and Funding the Next Development Campaign.