Official Proceedings of the One Thousand Two Hundred and Ninety-Ninth Meeting of the Board of Trustees, Columbus, Ohio, February 4, 1994 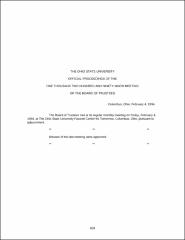 This item is the meeting minutes of the Board of Trustees of The Ohio State University held on Friday, February 4, 1994 at the Ohio State University Fawcett Center for Tomorrow, Columbus, Ohio. Topics discussed include an update on restructuring by Provost Richard Sisson, the President's report, the Research Foundation Report, the Cleveland Clinic Foundation report, amendments to the Rules of the University Faculty, degrees and certificates awarded for Winter Quarter commencement, Personnel Actions, Resolutions in Memoriam, Investments Committee report, Report on University development, the establishment of the H. William Clatworthy, Jr., Professorship in Pediatric Surgery, the establishment of named endowment and scholarship funds, the Fiscal Affairs Committee report, waivers of competitive bidding requirements October-December 1993, request for development bids for the Integrated Child Care Center addition, the authorization for 1994 small capital improvement projects, the report of award of contracts and establishment of contingency funds, the sale of real property, the approval of an Early Retirement Incentive Program under the State Teachers Retirement System (STRS), and the Student Affairs Committee meeting open student forum.