Official Proceedings of the One Thousand Two Hundred and Ninety-Fifth Meeting of the Board of Trustees, Columbus, Ohio, September 1, 1993 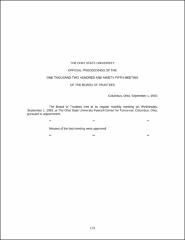 This item is the meeting minutes of the Board of Trustees of The Ohio State University held on Wednesday, September 1, 1993 at the Ohio State University Fawcett Center for Tomorrow, Columbus, Ohio. Topics discussed include the election of Robert M. Duncan to replace Madison Scott as Secretary of the Board, the ratification of Dr. Beverly Toomey as Acting Dean of the College of Social Work, the President's report, Cancer Hospital report, creation of the James Cancer Hospital Research Institute Board and approval of Cancer Hospital bylaws and medical staff bylaws, Research Foundation report, report of research contracts and grants, Hospitals Board report, Student Affairs Committee report, Agricultural Affairs Committee report, expressions of appreciation for Alva T. Bonda and Anita S. Ward for terms on the Ohio Board of Regents, awarding of Honorary Degrees, Personnel Action, Resolutions in Memoriam, Investments Committee report, Report on University Development including the establishment of Endowed Funds, named chairs and scholarship funds, the establishment of the Demkee Dental Athletic Provider Award for the College of Dentistry, Fiscal Affairs Committee waivers of competitive bidding requirements for April-June, 1993, the employment of architects/engineers for the ambulatory care facility, request for construction bids, sale of real property, a discussion of the 1994 Budget Supplement, a waiver of policy on retirement of principal administrative officials for Madison Scott, and the ratification of expression of appreciation to Madison Scott for his service to the University.