Official Proceedings of the One Thousand Four Hundred and Fifty-Third Meeting of the Board of Trustees, Columbus, Ohio, September 17, 2010 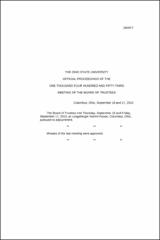 This item is the meeting minutes of the Board of Trustees of The Ohio State University held on September 16 and 17, 2010 at Longaberger Alumni House, Columbus, Ohio. Justin Rismiller was presented the Student Recognition Awards and Dr. E. Gordon Gee gave the President's Report. The committee meetings were then discussed. The consent agenda included the following resolutions: Ratification of Committee Appointments 2010-2011, Amendments to the Classified Civil Service Rules, Amendments to the Bylaws and the Rules and Regulations of the Medical Staff of The Ohio State University Hospitals, Ratification of Honorary Degree, Revocation of Degree, Personnel Actions, Resolutions in Memoriam, University Development Report, Authorization to Increase Professional Services Contracts, and Approval of Fiscal Year 2011 Total University Current Funds Budget. The appendices included processes, budgets, building plans, and maps that were not already present in the minutes.