Official Proceedings of the One Thousand Four Hundred and Forty-Fifth Meeting of the Board of Trustees, Columbus, Ohio, February 6, 2009 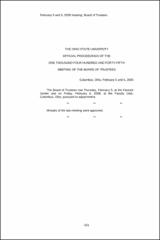 This item is the meeting minutes of the Board of Trustees of The Ohio State University held on February 5 and 6, 2009 at the Fawcett Center and on February 6, 2009 at the Faculty Club, Columbus, Ohio. Dr. Cloyd presented the Chairman's Report, followed by President E. Gordon Gee's President Report. Laura E. Kenkel and Tada A. Yamamoto were awarded the Student Recognition Award. Multiple committee reports were presented and dialogued. The consent agenda included the following resolutions: The Ohio State University Board of Trustees Amended Committee Appointments 2008-20009, Amendments to the Bylaws of the Medical Staff and Rules and Regulations of the Medical Staff of the Arthur G. James Cancer Hospital and Richard J. Solove Research Institute, Establishment of the Position of Charter Trustee, Approval of University System of Ohio Reports, Naming in Dodd Hall -University Medical Center, Naming in the Blackwell Inn and Conference Center, Naming of the Department of Chemical and Biomolecular Engineering in the College of Engineering: William G. Lowrie Department of Chemical and Biomolecular Engineering, Degrees and Certificates - Winter Quarter Commencement, Personnel Actions, Resolutions in Memorium, University Development Report, Purchase of Real Property, Athletic Ticket Prices and Fees for Football and Men's Basketball Fiscal Year 2010 and Golf Course Membership Calendar Year 2009.