Official Proceedings of the One Thousand Four Hundred and Thirty-Seventh Meeting of the Board of Trustees, Columbus, Ohio, November 2, 2007 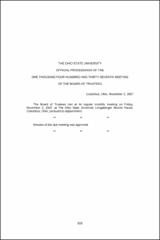 This item is the meeting minutes of the Board of Trustees of The Ohio State University held on November 2, 2007 at the Ohio State University Longaberger Alumni House, Columbus, Ohio. President E. Gordon Gee gave a short President's Report and Mr. McFerson presented on the Committee on Trusteeship Report. There was a vote on the Statement of Expectations The Ohio State University Board of Trustees. Multiple committee reports were presented and dialogued. The Waiver and Naming of the Les Wexner Football Complex at the Woody Hayes Athletic Center was voted upon. The consent agenda included the following resolutions: Amendments to the University Hospitals Medical Staff Rules and Regulations, Naming of Hawk's Nest Clubhouse at Ohio State ATI, Personnel Actions, Resolutions in Memoriam, University Development Report, Amendments to the Code of Regulations of the Ohio State University Managed Health Care Systems, Inc., Authorization for the Implementation of Administrative Rules Modernizing the University's Classified Civil Service, Approval to Enter into Feasibility Study Contract and To Enter into Design Contracts and To Enter into Construction Contracts and to Increase Construction Contracts, Easements (for OHIO POWER COMPANY, THE OHIO STATE UNIVERSITY, NEWARK REGIONAL CAMPUS, NEWARK, OHIO), Acceptance of the Report of Audit for 2006-2007, Waivers of Competitive Bidding Requirements (July-September 2007), Easement (for TIME WARNER TELECOM OF OHIO, L.L.C., WOSU TOWER - 350 W. DODRIDGE ST., COLUMBUS, OHIO), and Update on the Medical Center Master Facilities Plan. The appendices included processes, budgets, building plans, and maps that were not already present in the minutes.