Official Proceedings of the One Thousand Two Hundred and Eighty-Fifth Meeting of the Board of Trustees, Columbus, Ohio, September 2, 1992 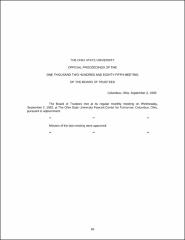 This item is the meeting minutes of the Board of Trustees of The Ohio State University held on Wednesday, September 2, 1992 at the Ohio State University Fawcett Center for Tomorrow, Columbus, Ohio. Topics discussed include the introduction of the new student Trustee, the President's report, amendments to the Committee reports for 1992-1993, Research Foundation report, report of research contracts, grants, and gifts, Hospitals Board committee report, Academic Affairs Committee report, personnel actions, Resolutions in Memoriam, Investments Committee report, Fiscal Affairs Committee report, waivers of competitive bidding requirements for April-June 1992, Cannon Drive Improvements project, report of award of contracts and establishment of contingency funds, Sale of property, abolishment of the Division of Emergency Medical Services and Fire Prevention, authorization, issuance and sale of general receipts bonds, Series 1992 A, and authorization, issuance and sale of variable rate demand general receipts bonds, Series 1992 B.