Official Proceedings of the One Thousand Four Hundred and Fifteenth Meeting of the Board of Trustees, Columbus, Ohio, September 23, 2005 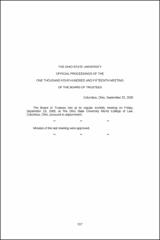 This item is the meeting minutes of the Board of Trustees of The Ohio State University held on July 8, 2005 at The Ohio State University Moritz College of Law, Columbus, Ohio. Karen A. Holbrook gave the President's Report and Elizabeth Lubnina was presented the Student Recognition Award. The committee reports were then discussed. Senior Vice President Bob McGrath presented on The Third Frontier Grants. The committee officially gave their support of State Issue 1. The consent agenda included the following resolutions: Waiver and Naming of a Complex, Amendment to Committee Appointments for 2005-2006, Regional Campus Board Appointment, Response to Hurricane Katrina, Approval of the Use of "Center," Honorary Degree, Personnel Actions, Resolutions in Memoriam, Report of Research Contracts and Grants, Report on University Development, Waivers of Competitive Bidding Requirements, Report on Interim Authorization for Two Capital Projects, Approval to Enter into Feasibility Study Design and Construction Contracts, Amended Employment of Executive Architect/Engineers Programming and Construction Management Service, FY 2007 through FY 2012 Capital Plan Including FY 2007 and FY 2008 State Capital Request, Purchase of Real Property, Implementation of the Student Information System, Fee 2006 Total University Current Funds Budget, and Appointment and Reappointment of Investment Managers. The presentation on Faculty Award Winners was given by Provost Barbara R. Snyder. The Presidential Evaluation performed. The appendices included statements, maps, tables, presentations, and budgets that were not included in the minutes.