Official Proceedings of the One Thousand Four Hundred and Ninth Meeting of the Board of Trustees, Columbus, Ohio, February 4, 2005 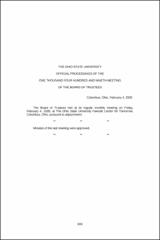 This item is the meeting minutes of the Board of Trustees of The Ohio State University held on February 4, 2005 at the Ohio State University Fawcett Center for Tomorrow, Columbus, Ohio. During the 1,409th meeting of the Board of Trustees, a report from committee chairpersons and a research update from Senior Vice President Bob McGrath were presented and discussed. President Karen A. Holbrook reported to the Board, followed by the presentation of the Student Recognition Award to Barbra Teater. Multiple committee reports were presented and dialogued. The consent agenda included the following: Appointments to the University Hospitals Board and University Hospitals East Board, Reappointments to OSU Harding Hospital Board, Establishment of an Interdisciplinary Master of Arts Degree in East Asian Studies, Establishment of Centers in the OSU Medical Center, Naming of the Center for Interdisciplinary Law and Policy Studies, Renaming of the Williams H. Havener Eye Center, Renaming of the Division of Agricultural Technologies at ATI. The Board of Trustees awarded two honorary degrees and approved multiple personnel actions. The Board heard several Resolution in Memoriam. The reports of Research Contracts and Grants and Report on University Development were presented and discussed. Resolutions entitled: Waivers of Competitive Bidding Requirements, Approval to Enter into Design, Construction, Design Build, and Construction Management Contracts, Easement, Long-term Lease of Space for the WOSU Stations, Athletic Ticket Prices and Fees for Fiscal Year 2006. The Fiscal Year 2005 Mid-Year Financial Report was submitted for adoption and the Fiscal Year 2004 Budget Versus Actual Report was submitted for approval. Dr. Robert McGrath presented on the Office of Research update. The appendices included relevant reports, maps, and budgets not already included in the minutes.