Official Proceedings of the One Thousand Four Hundred and Seventh Meeting of the Board of Trustees, Columbus, Ohio, November 5, 2004 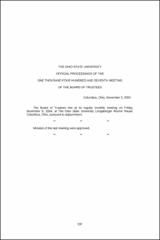 This item is the meeting minutes of the Board of Trustees of The Ohio State University held on November 5, 2004 at the Ohio State University Longaberger Alumni House, Columbus, Ohio. Ms. Longaberger started off the meeting an address to the Board and President Karen A. Holbrook gave the President's Report. Ryan Searfoorce received the Student Recognition Award and the committee reports were then discussed. The consent agenda included the following resolutions: Appointment to the University Hospitals East Board, Naming of the Medical Plaza, Waiver and Naming of a Building, Renaming of a Building and Naming of Internal Spaces, Honorary Degree, Personnel Actions, Resolutions in Memoriam, Report of Research Contracts and Grants, Report on University Development, Waiver of Competitive Bidding Requirements, Approval to Enter into Design and Construction Contracts, Purchase of Real Property (for 2050 Kenny Road, Columbus, Ohio), Long-term Lease of Real Property (for The Office of University Development, 1480 West Lane Avenue), Authorization for The Ohio State University to Amend the Supplemental Retirement 403(B) Annuity Plan, Acceptance of the Report of Audit for 2003-04, and Charter for the Internal Audit Department. Drs. Martha Garland, Mabel Freeman, Dean Susan Huntington, and Vice Provost Carole A. Anderson presented on the Class of '04 New Student Profile. Dean Richard Freeman and Professor Pat Osmer presented on the Large Binocular Telescope. The appendices included processes, budgets, building plans, and maps that were not already present in the minutes.